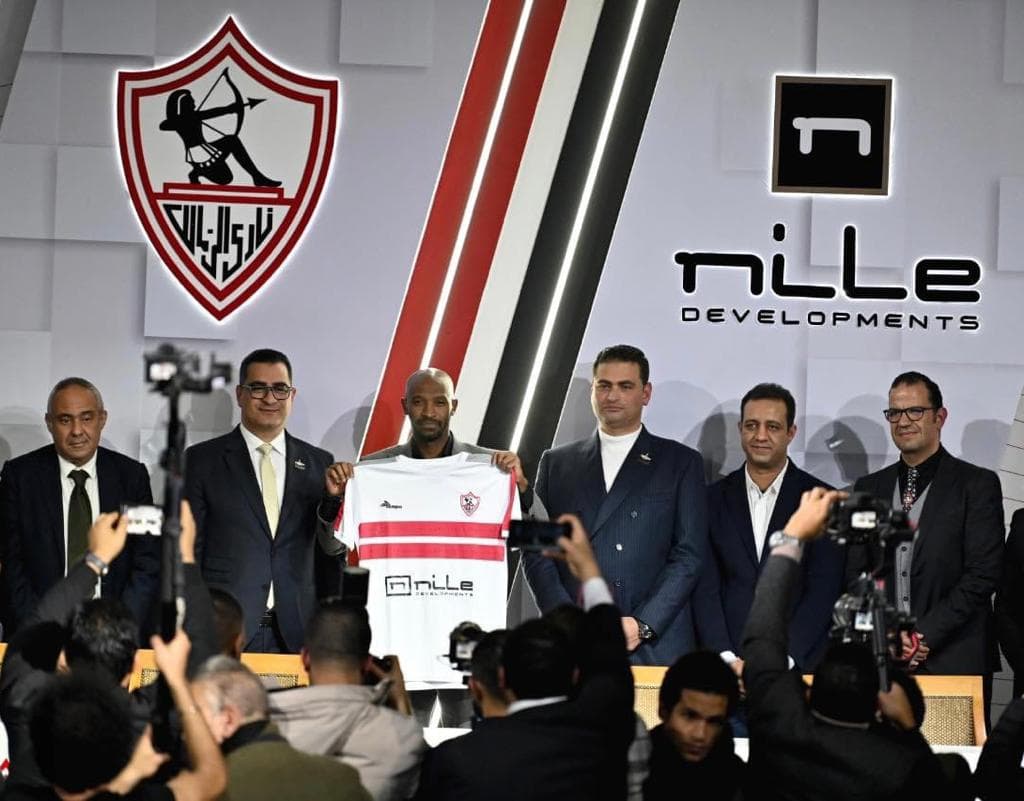 The Main Sponsor of Zamalek

Nile Developments, one of the biggest real estate companies in Egypt, just signed with the main sponsor of Zamalek sc for the next four years.

Within the framework of this important partnership, which was announced yesterday at a press conference held at the Four Seasons Hotel in the presence of a large number of the Board of Directors of the Club, led by Chancellor Mortada Mansour, the players of Zamalek Club, and a group of stars, media professionals, and journalists.

In, Nile was declared as the Main sponsor of Zamalek Club for a period of four years, making it unique in the field of real estate sponsorship. Its brand is on the team’s shirt as part of the Nile Company’s plan to grow and spread its brand, which is in line with its interest in supporting all sports teams of the Club, whether they play individually or as a team.

“The main sponsorship decision took time because it was important to look into who will sign his name and be associated with Zamalek Club.” So, in the end, the Nile Developments Company was chosen. It is one of the biggest and most reliable real estate development companies in Egypt, and it specializes in building skyscrapers. And I’m glad that the company is named after something great, the Nile River, which is Egypt’s lifeblood.

He thanked Engineers Mohamed Taher and Mahmoud Taher for their intense loyalty to Egypt and their work on developing the New Administrative Capital and building the most essential skyscrapers in Egypt, which put them in the lead as usual. He also said that in the coming years, the celebration would be held in one of the company’s towers in the New Administrative Capital,

31North, or Nile Business City. The Nile Company might build a headquarters for the  Club in the New Administrative Capital in the future.

Engineer Mohamed Taher, Chairman of the Board of Directors of the Nile Company:

Said that the company’s sponsorship of a big club like Zamalek sporting club shows that the company and its leaders believe in the value of sports and the importance of football as the most popular game in Egypt and the world.

Engineer Mohamed Taher also said that the enthusiastic competition and honorable victories that football brings are in line with Nile Developments’ goals always to be known for building skyscrapers in the heart of the New Administrative Capital that meets high international standards and has their names on them.

Taher said he’s proud to sponsor the Zamalek Club, which has won a lot of games in the past years and is a big part of Egyptian sports, as well as it’s known as the “School of Art and Engineering”, which has been around for more than 112 years. He hopes that this sponsorship will bring more energy and excitement to Egyptian football and help the Zamalek club achieve more success and excellence. And we promise that we will keep building on this cooperation and partnership to make more progress and reach more goals.

M. Taher went on to say that this step will pay off for all of the Nile Developments’ clients because it will increase the company’s marketing value in the real estate market. As a result, their investments will give them a high return. This is also the top priority of Nile Developments, which is always looking for the best real estate investment opportunities that will give its clients comfort and financial security in the future.

Engineer Mahmoud Taher, CEO of Nile Development Company, expressed his pride in sponsoring a large Club such as Zamalek Club and supporting it in its journey to achieve more success and championships. He emphasized that the company will work to maximize the benefit from its sponsorship of the club under the slogan “the Power Of Partnership” by achieving a new concept of a strong partnership between two giant entities, each in its respective field.

Taher continued, ” Nile Developments pursues continual development, a trait it shares with the Zamalek Club, and the Nile Developments want to boost its sales and expand into new areas through its business plan.” Since our founding, we have been the first Egyptian company that specialises in skyscrapers on the real estate market. We concentrate our marketing efforts on the New Administrative Capital market, which we are still committed to and will continue to be committed to, but we also want to increase our presence in a number of new Egyptian markets with the goal of diversifying our project sites, which will undoubtedly result in an increase in sales in those markets.

And Taher stated, “This agreement will present Nile Developments’ clients with a lot of new opportunities, including the opportunity to attend the club’s matches, as well as a valuable collection of original gifts bearing the club’s official logo.” Increasing our footprint through this cooperation will be invested in presenting our projects in numerous Egyptian markets and cities, and we are now offering innovative new solutions that are suitable for the requirements of these markets.

Why is the new capital the best real estate investment?

The opening of NileDevelopments' new Headquarters in Emaar,Mivida Business Park on an area of ​​2000 meters

Show More ..
Investing
for the
future